The Metropolitan Water District of Southern California’s Message of the Day: We Are Doing Well, But We Could Do Better

Californians may be headed for another year of drought after a February without measurable rainfall, which has not happened since 1864. To add to this, the Sierra watershed has dwindled to less than 50% so early in the year.  When it comes to the climate of California, Samuel Taylor Coleridge’s ditty in “The Rime of the Ancient Mariner” comes to mind: “Water, water everywhere but not a drop to drink.”

Capricious and unreliable, rainfall is a precious commodity in a state that has endured many contentious disputes over water rights and usage. As an agricultural region, the Central Valley grows some of the thirstiest crops in the world: almonds and pistachios while the urban districts have undergone exploding population growth. The state has 40 million residents, but its rainfall is grossly inadequate for its thirsty population.

Only 1/3 of our water supply comes from groundwater. The Metropolitan Water District’s Colorado Aqueduct and Pat Brown’s Sierra state water project supply about half of our water.  Built in the 1940’s and 1960’s, our water infrastructure is aging and in need of constant reinforcement. To say the least, we are facing many geopolitical challenges. Competing interests in the state need to resolve their issues, and SoCal needs to find ways to become less reliant on the Delta. COLLABORATION and RESILIENCY are of vital importance in the future.

As a result of climate change, the state’s rainfall data have recently shown some troubling swings. A record-breaking drought, bottoming out in 2015, was followed by record-breaking rainfall in 2018.  Too bad we are still unable to capture much of the rainfall, only 10%, which is more than other areas in the United States but way below some other countries, like Germany and Singapore. We can do more. This is one of the challenges of the Metropolitan Water District.

Another surfacing problem is water toxicity. Orange County has shut down 35 unhealthful water wells and is expected to shut down 60 more in the future. The West Basin District claims its water is pure, however, because its use of a reverse osmosis process.

Senator Ben Allen went on to explain that we have a complicated economic landscape in the state. The State needs to push cities to prevent run-off pollution and push industries to curb their polluting practices and to produce eco-friendly products. “Protecting our environment is really protecting ourselves.” SB 1044, introduced by Allen, intends to do just that by banning the toxic foam PFAS, which can be found in water and in our blood worldwide. We now have safer alternatives to this film forming foam used by firefighter. Cancer is now the leading cause of death for firefighters and is frighteningly above average cancer rates. 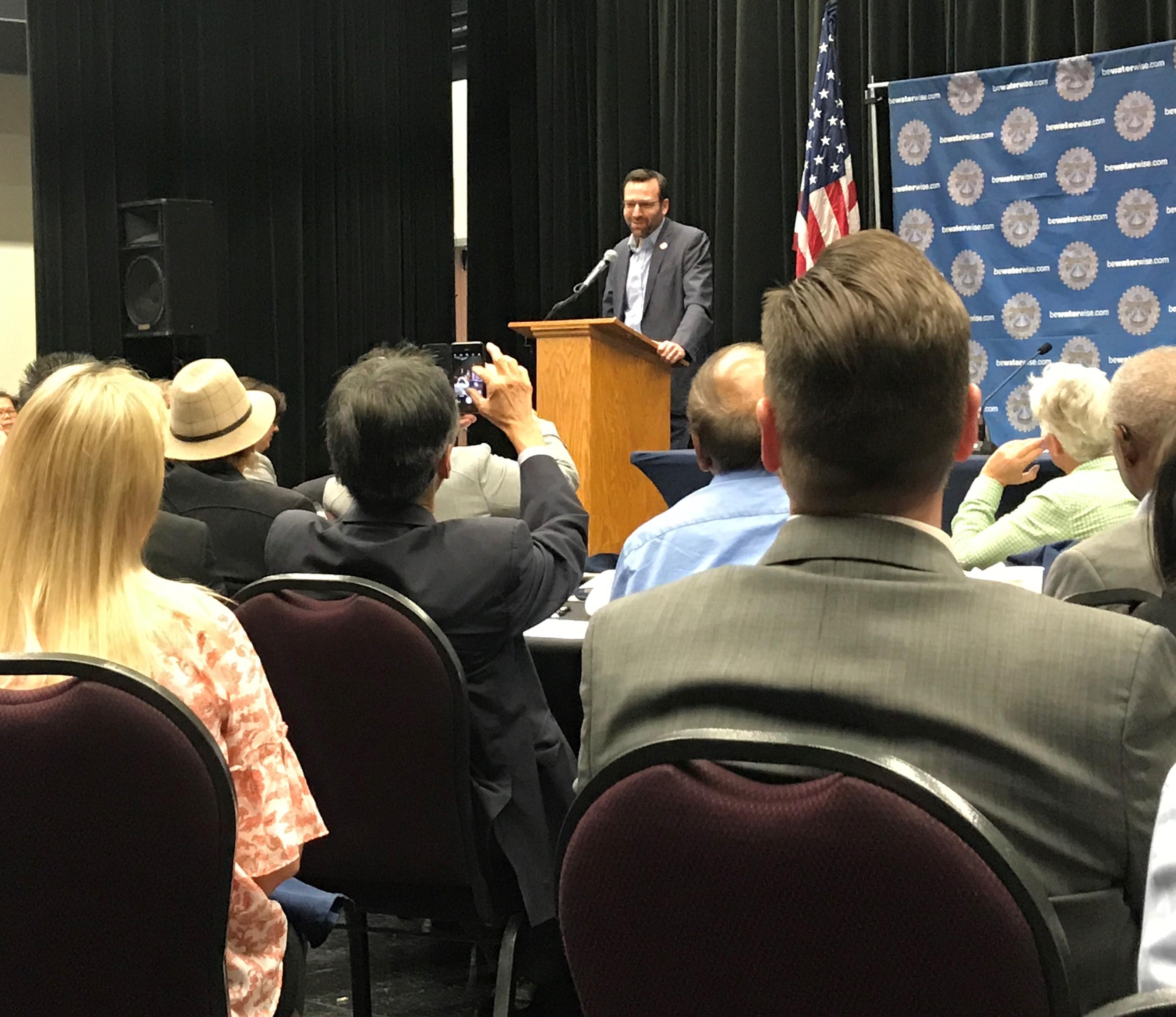 Senator Allen has introduced another proactive environmental bill, SB 45, the Wildfire Prevention, Safe Drinking Water, Drought Preparation, and Flood Protection Bond Act of 2020. It is a vehicle for a general obligation fund to help communities prepare for potential disasters like seal level rise, which is sweeping away precious real estate along the coast of California.  A primary concern, climate change has spawned annually an average of 113 bills dealing with the fallout from climate change.

Alongside collaboration and resilency, EFFICIENCY and PROACTIVENESS are also key component of tackling our water issues. Industries, such as farming, have worked hard to reduce their water use. Improving our water situation is complicated. Although we look at a vast ocean full of saltwater, desalinization is enormously expensive and has its own environmental issues. We have our work cut out for us in the state, and our water issues have no easy fix. The Metropolitan Water District of Southern California’s Message of the Day: We Are Doing Well, But We Could Do Better