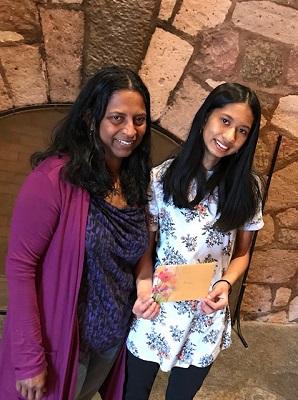 Philippa Fung, a freshman at Los Alamos High School, is the winner of the League of Women Voters essay contest celebrating the centennial of women’s right to vote. She won the award of $400, and the League judges were delighted to acknowledge her grasp of the history that led to the ratification of the 19th Amendment.

The essay topic asked “What Were Challenges That Women Faced in Gaining Voting Rights? What Obstacles Do Potential Voters Have Today?”  The League’s history began on February 14, 1920, when it was officially founded--six months before the 19th amendment was ratified to grant women the right to vote. It was created by suffragists who wanted the newly enfranchised women to cast educated votes.

But Philippa went beyond this simple history.  She told the League that as she got deeper into her research on those “challenges that women faced,” she was surprised to learn, “It wasn’t just men who opposed women’s right to vote for a hundred years; many women did, too. [Women fighting for the vote] is something different from what you might usually think of. That resistance was an important part of not getting the vote—you heard that men resisted, but you hadn’t heard about women resisting.”

Philippa said that understanding the history of women’s suffrage is a topic that’s still relevant in our lives today. “Most people want to vote, and with women’s suffrage, it’s cool how we’ve changed our point of view over the years.” But the importance of having a vote is still a critical civil rights issue.

As she researched these voting rights, she discovered that in 19 states felons who have served their full sentences still have no right to vote. “I think on balance, felons, under certain conditions (especially those who are improving their lifestyle)—should be allowed to vote again. I think every citizen of voting age should be allowed to vote.”

It’s not surprising that Philippa won the LWV Voting Rights essay contest. Along with multiple music competition awards, she won a Rotary Essay Contest when she was in middle school, and her sixth-grade design on the side of one of the County waste trucks reminds people to Reduce, Reuse, Recycle. She also plays the piano and viola, is active in her church youth group, and is a member of the LAHS Speech and Debate Club.

When asked how her brain works, she said, “It depends on what subject I’m doing—writing and memorizing stuff clicks more easily than math. I’m interested in current events and I like watching to see what happens. I enjoy seeing what other people think about current events. I think it’s cool to see how the system works. My favorite subject depends on the year—this year it’s history.” It’s no surprise that she also “likes writing a lot” and leans toward becoming an author of children’s books.

The League of Women Voters is honored to reward Philippa for her thoughtful essay. As she says, “We, as Americans, must push past these barriers to create free and equal voting rights for everyone across the country."

Read Philippa Fungs Essay: What Were Challenges Women Faced in Gaining Voting Rights? What Obstacles do Potential Voters Have Today?